What a day for the U16 1/2 footballers who were finally crowned 17/18 county champions today beating Askeaton on a scoreline of 1-10 to 1-06. Congratulations to the team, captain James Molyneaux , coach Mr Quinlan and to Michael Quinn and Eoin Finn who were a great help to the team throughout the year 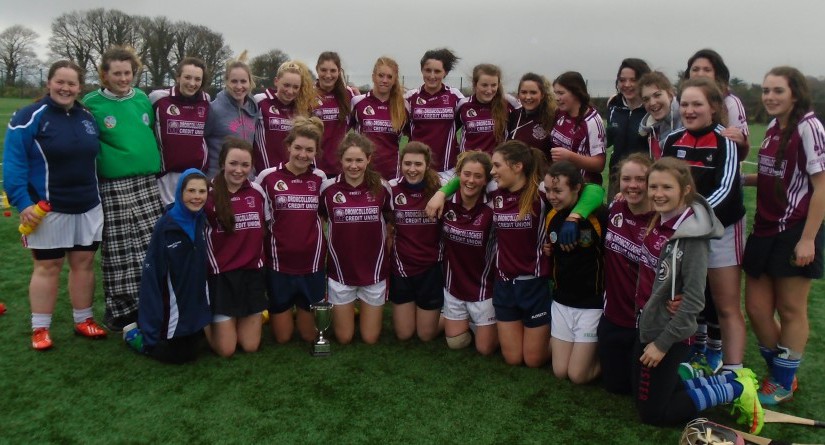 The referee on the day was Seanie Hartnett and weather conditions were ever changing. Hazelwood started in bright sunshine and ended in a flurry of hailstones. People involved with Laurel Hill and Hazelwood camogie teams and understand the rivalry between them knew it was going to be a tough battle from the throw in and it was hard to predict who would come out on top.

The match began at a hectic pace Hazelwood securing position and eventually leading to Cliona O’ Callaghan throwing the first point over the bar. However, from the get go it was clear that Laurel Hills side was going to put up a fight.

Hazelwood’s back line defended ferociously throughout, led by Tara Fitzgibbon and Rosin Twohill, who cleared every ball that came their way. Chloe O’ Brien’s impeccable delivery made the forwards’ job a lot easier, constantly running up and down the side delivering every ball she could into the forward line. On 17th January 2015, the Hazelwood Senior Ladies’ Football Team were crowned Munster Champions after a tough battle with Meanscoil San Nioclás from An Rinn, Waterford. The match was played in Glanworth, Co. Cork, and heavy underfoot conditions and bitter cold proved challenging for both sides.

From the whistle, it was clear that both teams had similar intentions, and it took 12 minutes for the first score to be registered on the board, after Laura Stack finished a good passage of play from Hazelwood forwards with a point. It wasn’t long before Meanscoil levelled the score after a pointed free. Hazelwood pulled away in the next 10 minutes with points from Tara Fitzgibbon and Laura Stack, and Cliona O Callaghan found the net to give Hazelwood a five point lead. Meanscoil responded well and scored two points in reply. With 5 minutes left in the opening half, both sides were pushing for scores before half time and Hazelwood were rewarded for their efforts with a point from the left boot of Cliona O Callaghan and a goal from Emily Rose Mulcahy giving them the advantage at half time. The half time score read 2-4 to 0-3 points in favour of Hazelwood.

After being refreshed at half time, both sides took to the field for the second half. Meanscoil had a better start to this half, and began putting pressure on the Hazelwood girls. However, having failed to convert all of their chances they only scored one point in their 10 minute purple patch. Hazelwood found their feet again after points from Katie McCarthy and Tara Fitzgibbon, but Meanscoil quickly responded with a well taken goal after dividing the Hazelwood defence. This left 5 points between the sides, and Meanscoil had the crowd’s support and the momentum entering the final quarter. The Waterford side had several chances to reduce the deficit, but missed frees as well as two top drawer saves from Hazelwood goalkeeper Rebecca McGuinness prevented them from clawing their way back. Hazelwood took advantage of Meanscoil’s inaccuracy, and with 8 minutes left on the clock, Hazelwood hit 3 goals in 3 minutes to finish the game as a contest, one from Katie McCarthy and two from Laura Stack. As the Meanscoil girls’ heads dropped, Hazelwood thoughts turned to celebrations as Laura Stack pointed from play and Chloe O’Brien finished the game with a superb point after an individual run of the length of the field. When the final whistle blew Hazelwood players and supporters rejoiced, with the Munster title heading to Dromcollogher. The final score read 5-08 to 1-04.
Cliona O Callaghan was awarded Player of the Match and Jerome Casey, Munster Treasurer, presented the cup to Hazelwood Captain Ciara McCarthy. On behalf of the team, Ciara thanked referee Shaun Cronin, manager Tom Halpin, coach Moss McCarthy and assistant coach Siobhán McCarthy. This was a well-deserved win for the girls, as they trained very hard, even twice over the Christmas holidays! Hopefully more silverware will come their way throughout the year.

Picture 3: Hazelwood College’s Cliona O Callaghan being presented with her Player of the Match trophy by Paul Murphy